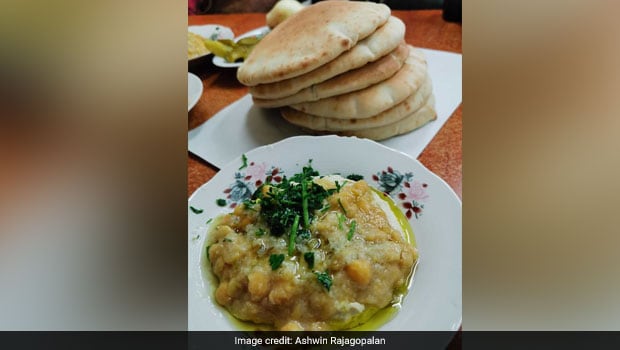 Hummus, a chickpea dip is no longer as exotic in India as it was maybe a decade ago

For a small area that is spread over less than a square kilometre, Jerusalem’s old walled city packs a whole bunch of experiences. There’s the Armenian quarter where descendants of Armenian settlers continue to maintain craft traditions like painted porcelain. The Jewish quarter is home to the Wailing Wall, among Judaism’s most sacred religious sites. Christian pilgrims come from far and wide to the Via Dolorosa or the Way of Suffering – the path that Jesus of Nazareth is believed to have walked on the way to his crucifixion. This path converges at the Church of the Holy Sepulchre. Jerusalem is not just the world’s holiest cities – it’s also home to the sacred Al Aqsa mosque. The old city’s markets haven’t changed much since the days of the Crusades. It’s here that I sampled the best hummus I’ve ever eaten anywhere in the world.

Hummus, a chickpea dip is no longer as exotic in India as it was maybe a decade ago. It’s not just the wave of Mediterranean restaurants across India but also awareness that this is a healthy dip option compared to sauces or dips made with cheese or mayonnaise. It’s surprisingly simple to make and you can find the ingredients in your local supermarket.

Hummus, a chickpea dip is no longer as exotic in India as it was maybe a decade ago

The markets in Jerusalem’s old city are quite typical of the Middle East and North Africa. It’s easy for Indians to relate to the colours, aromas and crowds that are typical of these markets. It’s probably why I enjoyed every minute walking through spice shops and stores that sell souvenirs and local food. These markets are not just for tourists but also for locals who come there for everyday produce. It’s easy to get lost in the maze in Jerusalem’s Muslim quarter. I’m not sure I can find my way back to Nazmi Arafat even with a little help from the locals. This tiny eatery barely has seating for a dozen customers but that doesn’t keep the crowds away. Tales of this hummus have spread far and wide; it’s no longer Jerusalem’s best kept secret and a hub for international travellers and gourmands alike.

This version combines whole chickpeas with the soft paste and is drizzled with generous quantities of aromatic olive oil. It’s what is known around Jordan and Israel as Msabbaha and its distinguished by its use of full chickpeas that add a great dimension to the texture. There are different variations of hummus, a dish that people from across the Middle East claim as their own. The oldest known recipe for the hummus dates back to the 13th Century and can be found in cookbooks in Egypt where it’s still a popular dish. The version in Jerusalem was served slightly warm with a pita bread. The hummus is an integral element in most cold mezze or starter platters in the Middle East while the word hummus itself means chickpea in Arabic.

I was surprised to find a similar hummus at the Layla, the rooftop Mediterranean restaurant at the Den, one of Bengaluru’s luxury hotels. When I learned that the hotel’s Senior consultant Chef Roy Soffer is from Israel, it all made sense.