Fox has released the first trailer for Ford v. Ferrari, which stars Christian Bale and Matt Damon as racecar engineer and designer, Ken Miles and Carroll Shelby, respectively. After being tasked by Henry Ford II (Tracy Letts) and Lee Iacocca (Jon Bernthal) in the 1960s, the two led the making of the Ford GT40, which would go on to rival the then-dominant Ferrari at the 24-hour Le Mans endurance race. Ford v. Ferrari has been directed by James Mangold (Logan), and co-stars Caitriona Balfe (Outlander), Noah Jupe (The Night Manager), and Remo Girone (La Piovra) as Enzo Ferrari.

The first Ford v. Ferrari trailer opens with Miles (Bale) at a racetrack with his young son Peter (Jupe), as he says: “Look out there, out there is the perfect lap. You see it?” After his son says he thinks so, Miles adds: “Most people can’t.” Elsewhere, Shelby (Damon) is approached by Iacocca (Bernthal), who pitches to him: “Suppose Henry Ford II wanted to build the greatest racecar the world has ever seen, to win the 24 hours at Le Mans. What’s it take?” Shelby says it will take “something money can’t buy” and then retorts: “You need a pure racer behind the wheel of your car. That’s Ken Miles.” 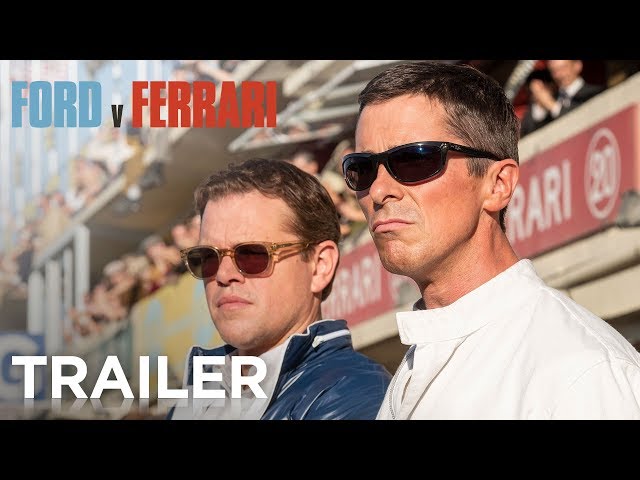 Ford II says he doesn’t trust him, with the Ford v. Ferrari trailer making it seem like he’s talking about Miles, and another possible Ford executive says they have heard Ken is ‘difficult’. Shelby claims, “Ken is a puppy dog” and that’s intentionally intercut with him getting punched in the face by Miles to disprove his statement. Soon though, Miles is racing around the track with Shelby looking from the sidelines, and the latter then shows up at the former’s home with one of his Cobras to convince him.

At a diner later, Miles asks Shelby: “You’re gonna build a car to beat Ferrari, with a Ford?” And when he wonders if he asked them for 200-300 years, underscoring his previous point about how Ford wasn’t part of the racing world back then, Shelby deadpans in response: “90 days.” Their humorous exchange is intercut in the first Ford v. Ferrari trailer with the two leading a team and working on the car, both on and off the track. Things don’t always go well, naturally, with Miles surviving an explosion, which begs a question from his son: “Do you think you could beat Ferrari?” to which he says: “I could try.”

The trailer ends with another crash and a horrified reaction from Miles’ family, which suggests it could end very badly for the test driver, and Shelby taking Ford II on a short, zipping test run of the Ford GT40 that shatters the Ford boss’ “born-ready” confidence and leaves him in tears.

Ford v. Ferrari drives into theatres November 15. The film will be distributed by Disney, which acquired Fox earlier this year.