Apple has finally updated its aged Mac Pro professional desktop workstation with an all-new design that promises to be flexible and upgradeable while delivering unprecedented performance. To go along with it, the company also unveiled a brand new 6K HDR monitor called the Pro Display XDR. Both new products will be available in the fall of 2019. With these launches, Apple is hoping to show professional content creators that it is still committed to them, after years of sacrificing expansion and traditional power-user features and prioritising stylish, sleek designs. These two new products are of course expensive, with the new Mac Pro starting at $5,999 (approximately Rs. 4,14,438) while the Pro Display XDR will start at $4,999 (approximately Rs. 3,45,353) not including the stand. At the WWDC 2019 keynote address on Monday, Apple also announced changes to iOS, macOS, and tvOS, apart from introducing the new iPadOS. 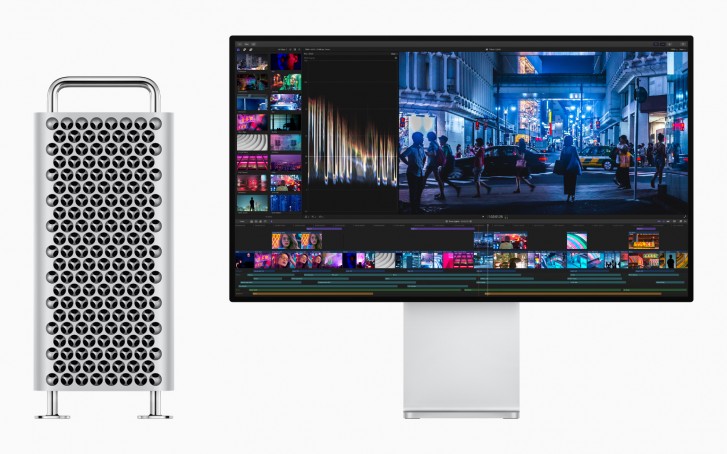 Apple first promised to redesign the Mac Pro in 2017, following intense criticism of the “trashcan” design of the then-current model and a slow pace of upgrades that saw the machine’s specifications fall out of date. That launch timeframe later slipped to 2019, and the new version has now been unveiled for the first time.

The new Mac Pro features a design that echoes the original Mac Pro, with a steel body, a mesh front panel, and handles at the top. It is designed to be upgradeable with eight user-accessible PCIe slots. Apple has designed a new MPX module standard that combines PCIe and Thunderbolt 3 connectivity in a form factor designed for easy cooling.

The Mac Pro will have an 8-core 3.5GHz Intel Xeon processor, with 12-core, 16-core, 24-core and 28-core options available. Memory support goes up to 1.5TB, and users can configure up to two MPX modules, each featuring two newly announced AMD Radeon Vega II GPUs for up to 56 Teraflops of graphics bandwidth. Each Mac Pro will have a 1400W power supply and up to two 2TB PCIe SSDs. Apple’s T2 security chip is also included.

The base model priced at $5,999 will have the 8-core Xeon CPU, 32GB of RAM, a 256GB SSD, and an AMD Radeon Pro 580X GPU. The prices of higher-end configurations have not yet been announced.

The Pro Display XDR is a 32-inch 6K Retina monitor with 1000nits of continuous display brightness and up to 1600nits of peak brightness and a 1,000,000:1 contrast ratio. Apple calls this “eXtreme Dynamic Range”, and it has been achieved thanks to a fine-tuned direct backlight LED array and a rear panel that acts as a giant heatsink. Apple promises true 10-bit colour and super-wide viewing angles.

The monitor is priced starting at $4,999, but an anti-glare option with a finely etched glass panel will cost $5,999 and the detachable Pro Stand which allows for tilt, swivel and height adjustment will cost $999 (approximately Rs. 69,000). The new Mac Pro can drive up to six 6K Pro Display XDR monitors.